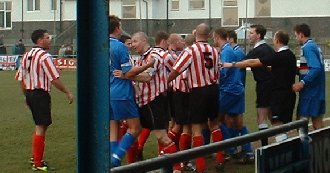 A foul by Whitby's Dixon (far right) on Dave Gardner prompted a melee after 76 minutes of the game. Above, Alty captain Mark Maddox attempts to shepherd away his Whitby counterpart as Gary Talbot (no.5) also tries to keep the peace. Jason Gallagher (far left) observes from a safe distance.

After a first half with few goal-scoring chances, Altrincham put in a strong second half display to record a deserved win. The only goal was a penalty in the 65th minute that was converted well by Barry Shuttleworth after Gary Talbot had been felled in the box. The game at times threatened to boil over and six players were booked, among them Gary Talbot, Ian Craney and Dave Gardner for Altrincham. Alty have now gone 7 games without defeat in the league.

After Alty had the better of the first couple of minutes, the home side then enjoyed some early possession. A foul on Rose by Robinson yielded an early free kick from which Gardner found Band but his header ran easily to Riches (2 mins). A fine Shuttleworth tackle then saw off a Whitby attack before Whitby won the first corner of the match off Gary Scott, on the Alty right (7 mins). Acton punched Ure's corner clear but a freekick was awarded to Alty in any case. After an Alty freekick, taken by Acton, had come back from the Whitby defence to Ure, he was tripped by Talbot in the centre circle and the referee booked the Alty centre-back (9 mins). Play soon switched to the other end where the speedy Gardner almost blocked a kicked clearance by Riches from a back pass before Acton had to be alert to block off Wilford; a goalkick resulted.

After Ure had a lunge at Adams, the referee had a word with both players. Following a foul on Band, a Gardner freekick from 20 yards out was cleared but the ball soon came back to Gardner who badly sliced his volleyed shot towards the right corner flag (13 mins). Play was fairly even but not particularly inspiring so far. A push by Reed on Band earned Alty a freekick as play continued to be punctuated by minor fouls. Then after Gardner had won possession well and, via Adams and Band, the ball had come to Craney, the Alty midfielder was tripped in centre-field, 25 yards out. Craney and Gildea then had a little spat but Shuttleworth's freekick only hit the wall (17 mins). Craney then got himself booked for a needless handball (18 mins) before Gildea had a very high and wide shot at the other end (20 mins). Gardner and the prickly Gildea then had an argument after the Whitby man had tripped the Alty man. Mr Reeves chose not to punish Gildea other than by a freekick award against him.

Alty won their first corner after 25 minutes but Talbot was penalised for pushing as the ball came over. A foul by Reid on Band then earned the Whitby defender a booking (26 mins). Alty now had the best chance of the game, so far, when Shuttleworth did well to feed Craney who played the ball, left, for Band who hooked the awkwardly bouncing ball over the advancing Riches but also over the crossbar (29 mins). A Whitby attack was then only half cleared by Talbot and the ball came out to Reid whose shot from 20 yards was very wide of the target (32 mins).

Adams's fine block tackle then saw off another Whitby probe. Gardner was looking Alty's best forward threat but the tall Whitby defence was otherwise standing firm. Craney was then penalised for an alleged hand ball, which the ref indicated had come off the top of his arm but which the Alty midfielder felt had been chested down (36 mins). Alty then came close to breaking the deadlock when the impressive Craney received the ball from Gallagher, via Rose, went past his marker inside the right of the Whitby box and lashed a shot into the sidenetting (37 mins).

Acton continued to handle the ball well and caught Dunning's lob into the box under a challenge from Robinson. Maddox and his fellow defenders were proving equally resolute for Alty as Whitby now enjoyed a good spell but without creating any clear openings. Craney was then felled by Reid, who had already been booked, but the referee did not even had words with the offender who made himself scarce. A fine clearance by Rose almost set Gardner free at the other end but half time came with neither side having imposed themselves on a tricky playing surface which largely ruled out the passing game.

Adams earned an early second-half lecture for a trip on Ure (48 mins) as Whitby enjoyed the better of the half's opening stages. Gardner was then fouled by Reed, who escaped a lecture for some reason. After lengthy treatment to Gardner's left leg, the Alty man hobbled off for a couple of minutes (49 mins). Shuttleworth's freekick for this offence seemed to be drifting out of play when Riches needlessly touched it to concede a corner on the Alty right but this came to nothing (50 mins). With Gardner back on, there was soon another stoppage to treat the prostrate Reed who seemed to have been injured in an earlier clearance of his lines. However, Reed soon recovered to upend Gardner and soon afterwards Gardner ran past the Whitby number five and got in a 20 yard shot from the left hand side which Riches held at the second attempt (52 mins).

Then Swales fired in a fierce 30 yarder which as well held by Acton as the sides belatedly seemed to find their shooting boots (53 mins). Soon, Gardner had another effort but sliced his shot this time. Gardner was soon again the victim of a foul which, this time, earned Laws a booking (55 mins). Altrincham now began to get the upper hand with Adams and Gallagher pushing forward more. However, a foul by Shuttleworth conceded a freekick, but Acton held this. After Reid, already booked, had flattened Shuttleworth he again escaped any censure from the ref other than a freekick award against him.

However, the book was soon out to capture Gardner's name after Laws had broken free in midfield and Gildea and Gardner had ended up in another spat (63 mins).

The game's decisive moment came when Gildea fouled Rose. The freekick from 40 yards out by Gardner led to Gary Talbot being pushed over inside the box. Mr Reeves looked across to linesman Mr Wilkinson, who was flagging for a penalty. After protests from the Whitby team, Barry Shuttleworth hammered the ball into the upper part of the net to the keeper's right, as Riches moved to his left (65 mins).

From the restart, an error by the otherwise solid Adams led to a corner on the Whitby right. This was half cleared before a fine tackle by Craney finally saw off the threat. Whitby continued to press for a leveller but Acton snuffed out a shot from Ure (69 mins). On the breakaway Gardner fed Craney who, unfortunately, trod on the ball as he advanced. The Alty defence held firm with the ever dependable Gary Scott seeing off the threat of Ure as Whitby gained a corner. However, Adams now had to crawl off the pitch briefly for treatment.

Whitby continued to press but on the break Gardner received a well directed nod down by Band from an Adams cross, which he shot onto the roof of a house behind the goal. Acton continued to collect balls played into the box as Maddox and Talbot dealt with everything else in the air. When, following a Scott throw, Gardner was crudely felled by Dixon near the right touchline, 30 yards out, a melee resulted involving half or more of the players of both sides. After blowing his whistle several times, Mr Reeves consulted his assistant and booked Dixon (78 mins). Acton was now enjoying some quiet spells at his end as Alty seemed to have weathered the initial Whitby response to falling behind and the visitors' lead looked relatively comfortable.

Maddox saw off the next two Whitby moves forward before an Alty freekick by Gardner from 30 yards out found Craney whose low shot was comfortably gathered by Riches (82 mins). Acton did have to be alert to smother a through ball soon afterwards but it was Alty who won the next corner when Gardner's cross was miskicked out by a Whitby defender. Though the corner came to nothing, Craney soon got in a shot which Riches saved well, low down (86 mins). Alty now made the first substitution by either side, taking off Gardner and bringing on Sullivan (87 mins).

Though Whitby won a last-minute freekick for a tackle by Rose the ball ended up with Acton as Alty coasted to the final whistle. They have now lost just once in 12 outings in the league and have risen to tenth in the table. Whitby, the league's highest scorers, had an off day and rarely looked like adding to their goals tally in this game. The pitch ensured that this was not a flowing game and the niggles of the second half further made sure that this was not the case. Nevertheless, Altrincham, with a spirited team effort, were deserved winners and continued to exercise their jinx on the Yorkshiremen, who have yet to beat the Robins in eight encounters.