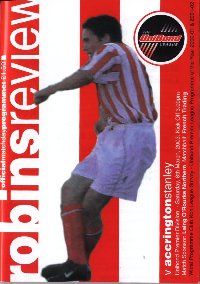 The Altrincham FC matchday programme, The Robins' Review, has won the UniBond Premier section of the prestigious Wirral Programme Club's Non-League Programme Survey for 2002-03. This is its third successive win in the UniBond Premier section of this competition. The Alty programme is jointly edited by Grahame Rowley, a Director of the Club, and his brother Terry, who spends most of the year working in the Middle East or North Africa but nevertheless shares the editorial role from afar. The overall UniBond winners were First Division champions Alfreton Town (160pts), just one point ahead of Altrincham. In a North-West clean-sweep, the runners-up in the Premier were Vauxhall Motors, followed by Stalybridge Celtic.

For more on the Altrincham programme, see here.

The Lancaster official site quotes new City manager and ex-Alty player Phil Wilson as saying, "Having won this league with Stalybridge and with my other experience at this level and the Conference, I am confident of bringing the good days back to the Giant Axe... [For] a club of Lancaster's size and potential to fall from 3rd to bottom half is worrying but that's why I took the job. I am confident of a top six finish next season and that will be acheived by good passing football- the way the game should be played. As you know, I have vast knowledge and experience of this level and I know what's required to make Lancaster City a force again".

Stalybridge Celtic have signed striker Greg Brickell (23) from NW Counties' side Atherton Collieries. Previously he had been a prolific scorer at a lower level for Coppull, (Wigan).

The new pyramid structure, endorsed by the FA National League System Committee and awaiting approval of the FA Council on 21st June will see 22 clubs at levels five and six of the National System (The Conference and Conference North/South). The UniBond is expected to revert to 22 teams in both its Premier and First Divisions. So, perhaps 13/14 First Division clubs can expect promotion to the Premier to replace those who join Conference North. The 8/9 eight clubs left in Division One would then joined by 13/14 clubs promoted from the NW or Northern Counties East leagues.

Our neighbours Trafford gave youth its head last season and their website says that "The obvious examples of players who have been given their chance and have taken it are Ben Ashmole and Paul Tilley who now feature regularly with the firsts". Paul was Alty Youth captain two seasons ago whilst Ben was also at Altrincham. 25 May 2003

The Altrincham players of 1978/79 have been added to the series of pen-pictures here.

Ashton United have offered goalkeeper non-contract terms for next season after having him on contract in 2002-03. However, Phil Denney has been re-contracted on improved terms.

Bradford PA's Horsfall Stadium is one of several sites being considered for the return of motorcycle speedway to the city.

The NLP reports that Danny Bacon, who hit 10 goals in 14 games for Hucknall Town whilst on loan from Mansfield last season, has been offered a new contract at the League club which cuts short Town's plans to sign him. Hucknall's Clint Marcelle is a target of the newly formed AFC Barnsley, established along the lines of AFC Wimbledon by disenchanted Barnsley FC fans.

The Gateshead chairman has told the NLP, "We must become self-sufficient and find alternative streams of income...We will be developing our community links". Despite relegation to the UniBond First, chairman Coulson has "agreed a budget which is bigger than last season's" for manager Derek Bell and a reserve and youth side are to be created. "Coulson believes gate income will increase, despite relegation, if the team begins winning".

Aylesbury United, who knocked Alty out of the FA Trophy, have lost their manager Steve Cordrey. He has moved down to Ryman Division One to manage Staines Town, which is his home-town, according to the Staines site. 24 May 2003

According to the Radcliffe Borough website former Alty players Niell Hardy and Scott Wilson "have left the club due to us not being able to agree terms with them". Barrie Keeling has also left Boro'.

Gainsboroughy Trinity have announced that their new manager and assistant will be Paul Mitchell and Peter Rinckavage, who until late last season were in charge at Worksop Town.

Ex-Alty man Phil Wilson, the new manager at Lancaster City, has told Lancaster Today, "I am very ambitious and... I am looking forward to getting stuck back in. The goal is to make sure the team qualifies for Conference North when it starts... The UniBond League has stagnated and been in the doldrums for a good few years but now with new teams coming in there is a new impetus... The Conference North will be a good league to play in and manage in". Wilson has appointed Peter Ward as his assistant manager, having previously worked with him at Leek Town in the 1990s. As regards his squad, Wilson added, "We do need some experienced UniBond players - they are the type of players we will being looking at, players who have won things at this level and know what it is about". Also looking for experience is Wilson's former club, Southport. The Southport Visiter quotes 'Port manager Mike Walsh: "'We have done some excellent work re-engaging [goalie] Steve Dickinson, securing Lee Ashcroft and acquiring a top goalscorer at this level in Andy Whittaker. I am talking to a number of Football League and UniBond players but it will take time to finalise deals... We are looking for players with experience of UniBond football and who we are confident can adjust to it". Walsh has also engaged seven trainees who will join the first team for pre-season training.

This is Lincs reports that "Ex-Gainsborough Trinity manager Phil Stant is in the running to become the new Grantham Town boss... Stant had only just quit two weeks ago, when he walked away as manager from Trinity after only a year in charge".

A second Harrogate player, midfielder Scott Bonsall, has left for Worksop according to the Harrogate website, and will be joining former team-mate Paul Sykes at Worksop next season. However, Harrogate manager John Reed says "that he is confident Bonsall will not be missed... 'He missed 24 games last season with injury and the year before he missed 19'". Reed added, "I've spoken to a couple of players from Worksop, one from Burton, one from Gateshead, one Accrington Stanley, one from Hull City and one from Scunthorpe United. So, there will be plenty of new blood to come in and replace any players we lose". Worksop, who have appointed Gavin Walker from Sheffield United as their assistant manager, have also signed former Northwich and Droylsden striker Robert Pell from Southport according to the Tigers' official site. Pell is their fifth signing of the close season but Worksop have also released five - Carl Smith, Krystof Kotylo, Darren Beesley, Brian Linighan and Nicky Wood. 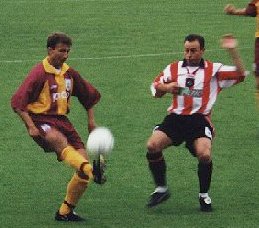 Altrincham have confirmed two more friendlies. On 5 August Bradford City, who like Alty celebrate their centenary next season, will bring a team to Moss Lane. City share another feature with Alty in that their team also travels on the Go Goodwins coaches of Alty chairman Geoff Goodwin. Pictured right, Mark Ward challenges Romanian international Dan Petrescu when Alty met Bradford City at Moss Lane in August, 2000.

On 26 July St Helens Town will entertain The Robins. For a full list of pre-season games, see here. Remember all the home friendlies are free if you buy a season ticket- see the link near the top of page for details.

SAM reports that "Two donors have made substantial cash contributions to Altrincham FC, in exchange for life season tickets. The parties, one individual and a couple, made their donations to the cash-strapped club in the past month and manager Graham Heathcote hopes more will come forward. "They have made substantial donations to the club and if there are any more out there, that would be smashing".