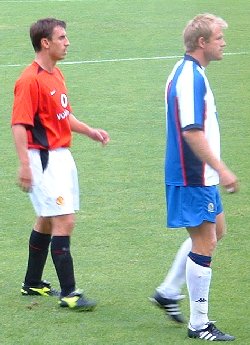 Kleberson (José Kleberson Pereira), Manchester United's new Brazilian midfielder played for Manchester United Reserves last night at Moss Lane tonight as did Gary Neville, who was subbed after 66 minutes. However, the Brazilian made very little impact on the proceedings which ended in 2-0 defeat at the hands of Blackburn Rovers Reserves, the goals coming from Donnelly (50 mins) and Ostenstad (58). Sir Alex Ferguson and Graeme Souness attended the match, as did Port Vale manager Brian Horton and Rovers' coach Dean Saunders in a crowd which must have exceeded 1,000. Rovers included four starters (incl. Grabbi and Mahon) and two subs from the side which beat Alty at Moss Lane on 9 August, whilst United also fielded Roy Carroll and Kieran Richardson. Every bit as entertaining as the play was the excellent refereeing display of Stephen Brand, who makes every decision perfectly clear to spectators whenever he officiates. His demonstrative booking of Egil Ostenstad for "mouthing" was worth the entrance money itself. Pictured right is Gary Neville marking Ostenstad last night.

The full list of United Reserves' fixtures at Moss Lane is here.

Click the Through the Years link above for a record of all Alty games in previous years on 23 August, the date we play Frickley this Saturday.

FROM THE OTHER SIDE

The Marine site has a report of Tuesday's game at Moss Lane. Keeper Crookes's save from Mattie Hughes is described as a possible "save of the season".

The Alfreton site says, "On the opener against Altrincham, Reds' Director of Football Dave Rushbury said: 'I thought we would struggle to break them down - as they are a strong, well established side - but with a little more composure going forward I thought we could have gone on and won the game. Overall, I thought we were the better side and the defence were outstanding. Tony Hemmings was less than six inches away from giving us the lead midway through the second half and only a terrific stop under the angle fromthe ‘keeper prevented Mick Godber’s injury time free-kick from notching us a winner. It was that tight'".

On Tuesday night Lancaster's ex-Alty player Tony Sullivan was sent off on Tuesday after for throwing the ball at the Southport bench.

NL Daily says that "Spennymoor United have confirmed they have made a formal application to join the Nationwide Conference North... First Division neighbours Bishop Auckland, however, won't be applying, even though the champions of that division are put into a play off with Premier Division clubs for a Conference place".

Burscough report that "John Norman, has left Victoria Park, having been released by mutual consent". Frickley, whom we meet on Saturday have "signed 20 year old striker Mark Vickerage, who impressed during pre-season. Mark has been playing with Brodsworth in the NCEL but was signed on UniBond forms with Bradford Park Avenue last season and played for them in their opening League game last Saturday. Unfortunately, however, central defender Paul Marquis faces being out of action for around 3 weeks with the injury that forced him off halfway through the first half on Saturday".