After yesterday's bad injury to Kieran Lugsden whilst playing for the first team at Whitby, comes the good news that he had been released from Scarborough hospital this afternoon. He has suffered a wrist fracture and is also cut and bruised about the head. It will also take some time for him to overcome his grogginess but a scan has indicated there is no lasting damage after his collision with a concrete wall at the side of the pitch. 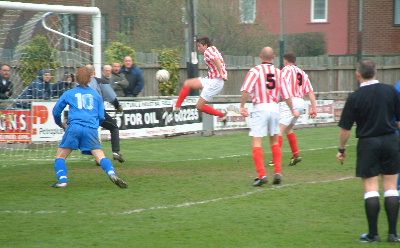 Marcus Hallows nets goal no.3; an image from Alan Johnson's photosite where more are to be seen.