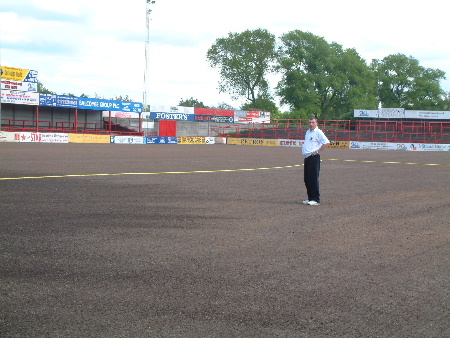 Alty manager Graham Heathcote surveys the recently seeded pitch at Moss Lane. This is one of several pictures on Alan Johnson's photosite which show the extensive pitch-works now going on at Moss Lane.

Ken McKenna is one of the Robins' Review's 'Alty Legends' but he is also one of the 'Telford Heroes', a team of ex-players which beat SkyOne's Harchester United 3-1 in a recent fundraiser for the impoverished Conference club. "Over 1,600 people witnessed some of Telford's finest ever players... with Ken McKenna's superb opening header worth the admission price alone" says the club website. Geoff Hurst and Gordon Banks were guests at the game. (Thanks to Mark Eckersall for help with the above).

And, Welsh Premier reports that the "Total Network Solutions’ boss Ken McKenna is to remain in charge... There had been speculation about the manager's position following the club's failure to secure a trophy in the last campaign... Since taking over the reins in 2001, former Altrincham and Runcorn striker McKenna has led Saints to three runners-up places. Their season gets under way again on 19 July with a UEFA Cup Preliminary Round tie".

"Meanwhile, Alan Morgan - who was on loan at Altrincham between spells at Tranmere and Doncaster Rovers - is the new manager of another Welsh Premier side, NEWI Cefn Druids. His career took him to Morecambe and Porthmadog, before joining Druids earlier this year as a player", reports Andrew Lincoln the Webmaster of TNS's Saints-Alive! website.

Another Alty old boy, Dave Gardner, had less good news this week when Manchester United announced that they would limit their dealings with the Elite Sports Agency, run by Dave and Sir Alex Ferguson's son, Jason.

Harrogate Town have done some thorough research on travelling distances in Conference North. According to their figures, Barrow (5,997 miles) will have the most travelling to do whilst "Altrincham will clock up the least number of miles (2,720)... Altrincham have the most local derbies, 8 matches with 1-way trips of less than 50 miles".

Nationwide confirms that "Tamworth wing-back Rob Warner has left the club to join Conference South[???] side Worcester City... Warner made 37 Conference appearances this season, but has now opted to move to St George's Lane".

Alty meet Trafford in a pre-season game on 20 July. Trafford FC boss Danny Johnson says "I have already been dealt two major blows when both Andy Lundy and Michael Ogden confirmed that they will be away on holiday for the first two weeks of the season. This isn't ideal preparation". Lundy signed UniBond forms for Altrinncham last season but never played for The Robins. Trafford will field an under-21 third-string team next season as Johnson says "I have over 40 lads at training on a Thursday evening and with most of the players 21 or under it makes perfect sense to have an Under 21's team with the majority of this team forming our youth team which will be entering the FA Youth Cup". 25 May 2004

Accrington Stanley have made an improved offer for Altrincham captain, Ian Craney after an earlier offer was turned down by the Moss Lane Board. However, the new bid, which is is still below the club's valuation of the 21 year-old England semi-pro international midfielder, is being considered by the Board. Craney is believed to be keen to join the full-time game and recently had two games for Tranmere Rovers' reserves.

Manager Graham Heathcote has spoken to the rest of the squad and is hopeful that all of them will remain at Moss Lane. A new signing is expected during the next week after verbal agreement was reached with the player in question.