The two teams had met in a pre-season game, which the Robins had won convincingly 4-1. However, this was a different footballing side which Curzon fielded last weekend. 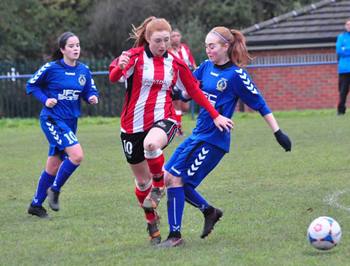 In a match that Altrincham dominated throughout, they were made to pay for their profligacy, for not converting a host of chances.

The first half hour was a scrappy affair with both sides locked in a midfield battle with through-balls from both sides either over-hit or swallowed up by the opposing defences. The only chance on target fell to the visitors, from which they scored via a long range strike on 20 minutes.

As the first half drew to close, Altrincham created the chances. Georgia Plant’s low, angled shot forced the Curzon goalkeeper into making an impressive save, Jess Hartopp had a strike that was headed cleared off the line, whilst subsitute Laura Kelly came close, steering just wide with her first touch.

After the break, Altrincham continued to dominate. Plant had a free-kick that hit the side-netting whilst Hartopp found shooting space, but drove her shot straight at the keeper.

Brogan Walsh came off the subs’ bench. She, too, had a shot that was thwarted by the visiting goalkeeper. Kelly also came close when her shot was pushed onto the post and, from the lingering danger, Walsh curled wide.

But the Robins couldn’t find a way through as all three points were clinched by the visitors come the final whistle.