Football is often described as being a matter of life and death but, more than a century ago, the supporters of our football club experienced both extremes in the space of two and a half years.

Fans mourned the football-related death of one of the club's players in 1902 but then enjoyed an unbeaten season at home in 1904-05 which culminated in the club lifting the championship of the Manchester League which, in turn, prompted a musical parade through Altrincham!

As most supporters will know, the forerunner of Altrincham FC was Broadheath FC, Broadheath being a north-western district of the town. Before changing its name and moving to the current ground at Moss Lane, Broadheath FC played at Pollitt's Field (adjacent to the former gasworks) near present-day Urban Road from 1903 to 1910. 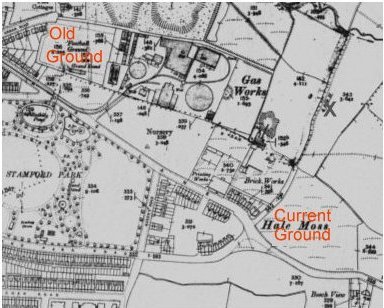 On 4 November 1896, the Manchester Courier newspaper reported that Altrincham Council had been offered Politt's Field and Nicholl's Pond by Lord Stamford's Estate for £2,500, the land "to be used as a tip and for other purposes".

However, by 1903, Pollitt's Field had become the new home of Altrincham F.C., the successor to Broadheath F.C. The first competitive match was a 5-0 win over Glossop on 19 September of that year, which was kicked off by the Club's President! A press report said that the game ended with "a bombardment of the Glossop citadel".

More on Pollitt's Field can be found here, including fascinating information provided by Terry Rowley.

In advance of the move to Pollitt's Field and the renaming of the club as Altrincham FC, the Warrington Guardian of 1 July 1903 printed a detailed report on "The annual general meeting of the Broadheath Association Football Club... at the Forester's Arms, Altrincham on Friday evening. Mr R.H. Lee presided over a good attendance.

The Secretary (Mr. B. Badcock) submitted the 11th annual report. At the commencement of the season he said a gloom was cast over the club by the death of one of their players. He did not meet his death on the field of play, but there was no doubt it was caused through playing in the first match. The club had played 32 matches, won 11, drawn 6, and lost 15. They did fairly well considering the bad start they made.

About Christmastime it looked as though they would be the wooden-spoonists. The team, however, seemed to rouse itself, and at the finish they secured a very good position. One reason why they did not meet with any success at the outset was on account of the large number of changes made in the team. They tried 44 players, and from that anyone would know they would not have very much combination.

Their ground at Timperley, however, had been in the pink of condition during the last season, whilst the grounds on which they played their "away” matches were more like quagmires. He thought that was the reason why they lost so many "away" matches...

Their one brilliant star, George Elmore, left them, and after that the whole team seemed to break up. Still they had recompense for that in the shape of a cheque for £lO from the West Bromwich Albion F.C. With regard to their finances they had finished better then he expected. They arranged a concert and the mistake was that it was too good. The consequence was that they lost on it... The annual draw was a great success. Altogether, they wound up the season in a brilliant manner, beating Sale Holmfield in the Medal competition in a hollow fashion.

The committee at the close of the season entertained the players to dinner. It was almost suicidal to remain on their present ground at Timperley, it was so outlandish. They had at last secured a ground in Altrincham. The Altrincham District Council had unanimously decided to allow them to rent Pollitt's field, and it now only remained for three of the councillors to arrange terms with the committee.

Alterations would be made to the field; it would be lengthened, widened, and drained, and the brooks around it would be piped. They might safely say they were all right in that respect. The Chairman said in the event of the negotiations with the Council failing, one of their Vice-Presidents had promised to secure a ground for the club in Altrincham".

The player mentioned, above, as dying as a result of playing for Broadheath was Robert Winstanley, a Llandudno resident who, according to the Manchester Courier of 12 September 1902, had played in the match against Hyde in the Manchester League the previous Saturday. "In running to the ball, Winstanley seemed to collide with two of the Hyde players. He appeared to collapse and had to be removed from the field to the headquarters of the Broadheath club, [the] Cheshire Cheese Inn [still standing, but now offices].

He was driven to the house of a friend at Sale and recovered... but, on Wednesday morning, he was seized with illness and suddenly expired, death being due to heart disease. Winstanley, who was a native of Llandudno, and had played with several Welsh clubs, was a very good forward".

Sadly, George Elmore, the star player at Broadheath, also met an untimely death, dying on the Somme battlefield in 1918.

By the first days of May 1905, the Northwich Guardian was reporting on a 3-1 home win which saw Altrincham secure the Manchester League title. "Nearly 6,000 spectators were present" at Pollitt's Field" the press reported.

"An improvised grand stand had been erected on the reserve end of the ground, upon which the ceremony of presenting the [league championship] cup was performed" by the League's President.

The President said "He was very pleased indeed that the oldest club in the League had, at last, won the cup (loud applause)... He had been visiting the town as a player and spectator for a good many years and, if any one could testify to the generosity, hospitality and friendship of the club, he could do so... Not only had they won the Cheshire Senior Cup and been finalists for the Manchester Junior Cup but they had carried off the Manchester League Cup...

The Borough [of Altrincham] Band, which was in attendance played 'The Conquering Hero' after which rousing cheers were given for the runners-up, the Denton team... and the Altrincham players.

A procession was afterwards formed and the streets were paraded. the players were 'chaired' around the town and, in the evening, the team and officials drove around Altrincham and Sale, proudly waving aloft the handsome trophies. Everywhere they met with an enthusiastic reception, the inhabitants naturally having every reason to be proud of a club which has gone through the season with such signal success".