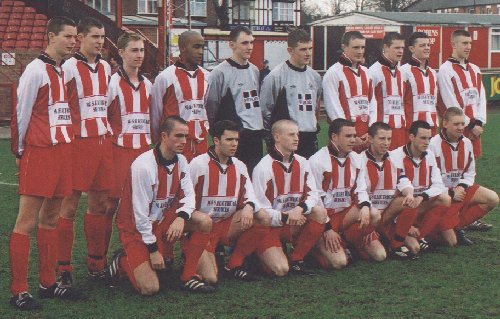 Altrincham's Youth side are managed by George Heslop, ably assisted by Neil Thomason. The team plays in the Bolton and District Amateur Football Combination (North West Youth Alliance Under-18s' Premier Division). I am very grateful to George for his help in providing information for this page. If anyone else has information on the Youth team, I am always happy to receive it. You can e-mail me here. John Laidlar.

Above, the Youth team seen before the home cup game against Prestwich Heys.

Below are some pictures from the Open Cup Final against Prestwich Heys at Moss Lane:

Alty Youth players suffered a number of injuries as the season ended. Mario Daniel was sidelined by a head injury, Paul Robinson has been diagnosed as having two broken bones in his foot after being injured in the Reserves and Lee MacDonald limped off in the same game. Finally, Francis Evans had to go off in yesterday's game. Hopefully all will be fit well before the start of next season. 16 May 2002

ALTY END WITH A WIN

An Alty side fielding many newcomers won 2-1 tonight against Prestwich Heys. The goals came from two of the new players, Liam Pearson and Connor Morris. Alty finished third in the league. Match report here.. 11 May 2002 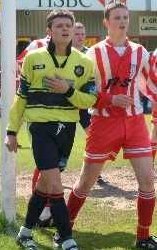 Prestwich Heys gained revenge for last season's defeat by Alty in the Open Cup Final by winning this year's competition this afternoon at Moss Lane. Alty went ahead after 3 minutes through Mario Daniel but Heys soon equalised. The score remained 1-1 even after extra time. Alty then lost 4-5 on penalties. Match report here.

Lee Shillito is seen, above, during the Cup Final in a picture reproduced from Alan Johnson's website.

Alty Youth played well tonight but were unable to break down the Morecambe defence. Match report here. 6 May 2002

An Alty team weakened by injury lost 0-1 at Burscough last night. The goal was a penalty. 28 April 2002

The NW Youth Alliance Premier Cup went to Morecambe this afternoon in the Final at Bamber Bridge. Altrincham were without both Vernum Rowland and Mario Daniel, whose involvement in the first team squad ruled them out of contention. Match report here

Pictured above by Alan Johnson is the team before the game; more of Alan's excellent pictures are on his website.

The NW Youth Alliance Open Cup Final between Altrincham and Prestwich will be played at Moss Lane, Altrincham on Saturday, 11th May. This is a repeat of last year's Premeier Cup Final, which Alty won.

I started with the Youth team as Secretary and Assistant Manager for the 1997-98 season. They were Altrincham & District Youth League champions, winners of the League and Supplementary Cups and runners up in the Edgar Webb Cup.

The scheduled game this Thursday (17th) at home to South Sefton has been postponed as the opposition have several players unavailable. 14 April 2002

The revised league fixture list and the updated league table are here. Seven clubs are now covered by four points at the top! 12 April 2002

There is now a brief report on the Youth team's fine Open Cup semi-final win against Marine here. 11 April 2002

With goals from Mark Drew, Lee Shillito and Lee McDonald, Alty Youth reached the final of the NW Youth Alliance Open Cup with a 3-1 win over Marine last night, at Burscough. They will play Prestwich Heys in the final, probably on 5th May. The Alty Youth side already have another cup final booked for 21st April in the Premier Cup at Bamber Bridge FC. More details on the Marine match to follow. The revised league table is now available, taking into account Northfield's resignation from the League; click the Youth Fixtures button above. The Alty line up was Broxson, Drew, Robinson, Horton, Bailey, McDonald, Smith, Tilley, Shillito, Daniel and Thompson with Walsh, Lunt, Ardayfio, Glynn and Leigh as the substitutes. It was Alty's eighth straight win on the run.

Click here for the revised league table, which reflects the resignation from the League of Northfield Juniors. 7 April 2002

Alty Youth today beat Daisy Hill 2-1 to reach the semi-finals of the Open Cup, against Marine. The Semi is at Burscough FC on Wednesday, 10 April at 7.45pm. Daisy Hill took the lead after 20 minutes with a header and Jordan Broxson made some good saves to keep Alty in the match. Alty were much improved in the second half and their goals came from a Paul Robinson penalty after 48 mins, following a foul on Lee Shillito, then Lee himself scored a fine goal after 70 minutes. Shortly before the second goal, Daisy Hill had a player dismissed for a second offence. Alty's team was 1. Jordan Broxson, 2. Lee McDonald, 3. Paul Robinson, 4. Ian Horton, 5. Steve McGrath, 6. Lee Shillito, 7. Richard Smith, 8. Paul Tilley (capt.), 9. David Walsh, 10. Steve Lunt, 11. Lee Thompson. SUBS: 12. Domain Esdale (for Walsh), 13. Neil Wolszcsuk (gk), 14. Paul Glynn, 15. Mario Daniel (for Lunt), 16. Michael Bailey (used).

Northfield Juniors have resigned from the NW Youth Alliance League, so Alty's win over them has been deleted from the record books. The revised league table will be posted here as soon as possible. The resignation also gives Prestwich Heys a bye into the final of the Open Cup. 4 April 2002

The venue for the Premier Cup Final on 21 April has now been switched to Bamber Bridge FC. Click on the Links/Maps button above for a map.

A team of Alty Youth trialists played a Stockport County U-19 side on Tuesday at Ridgeway Road. Though County won 2-1, Youth manager George Heslop was able to run his eye over some very promising talent for next season. 2 April 2002

Both Vernum Rowland and Mario Daniel were on the bench for Monday's first team game at Bradford. Vernum got on to the pitch for most of the second half.

A NW Youth Alliance representative side containing four Altrincham FC players drew 1-1 with Scottish under-19 side Campsie Black Watch on Sunday. The Alty Youth team was out of action yesterday because of the above match.

Youth captain Paul Tilley is reported to have signed for UniBond First Divison club, Trafford. However, it is hoped that he may remain available for Altrincham Youth games. 1 April 2002

Steve Lunt may be one of the youngest members of the Alty Youth side this season but, apart from first-team veteran Mark Maddox, he is the only player at the Club to have featured in the Alty matchday programme as long ago as 6 November, 1996, when Altrincham met Southport in the Conference. Looking through the Robins Review for that game you will find a report of St Hugh's R.C. School of Timperley's seven-a-side game in the Altrincham FC/EN-S Youth Development Initiative Trophy, which they lost 1-2 in a penalty shoot-out to Oldfield Brow. The programme reports that "St Hugh's scorer was 11 year-old Stephen Lunt". Steve is still knocking the goals in and was on the mark in the Youth team's most recent game, a 2-0 win at Lancaster. 25 March 2002

Altrincham moved within 2 points of the league leaders Marine, with four games in hand, after beating Lancaster 2-0 on Sunday, with goals from Steve Lunt and David Walsh. Report here. Sunday's other result was South Sefton 2 St Helens College 1 and the updated table is here. 21 March 2002

Click here for the updated NW Alliance table as at 10 March, supplied by George Heslop. Since then, leaders Burscough have lost again, 0-3 to Marine, following a 1-4 reverse at home to Morecambe. 19 March 2002

Vernum Rowland made his first first-team start tonight in the Cheshire Cup Final whilst Lee Thompson was a second-half substitute.

Vernum Rowland was again in first team action yesterday in the first team's 1-1 draw with Gainsborough. A match report is here. 14 March 2002

Three Youth players were called up to the first team yesterday against Bishop Auckland. Vernum Rowland made his league debut after 55 minutes whilst Mario Daniel came on shortly afterwards. Both acquitted themselves well, with Mario almost notching an equaliser from a cross by Vernum. Lee Thompson was on the bench for this game. 3 March 2002

The Youth team's season will now run till mid-May. Due to lack of action on the field, Alty have dropped to 4th in the table. For the updated fixtures and league table, click here. 17 February 2002

Altrincham Youth beat Prestwich Heys 3-1 today in the semi-final of the NW Youth Alliance Premier Cup but they did it the hard way! Trailing 1-0 they had Mark Drew sent off after 87 minutes but in the 88th minute they equalised through a well taken header by substitute Steve Lunt. Steve netted again three minutes into extra time and Paul Robinson added a late penalty following a foul on Lee Shillito. Match report here. 10 February 2002

Above: Mark Drew and Paul Glynn.

Altrincham's semi-final against Prestwich Heys in the Premier Cup is now NOT to be played at Christie Park, Morecambe. Instead it will take place at Moss Lane at 1.30pm on Sunday 17 February. The other semi, between South Sefton and Morecambe, has been switched from Moss Lane.

Alty Youth have scored forty goals in all competitions this season; the scorers are: