The platforms leading to the tunnel at S. Bento..

S„o Bento Station is the central station of Oporto and is famous for the tiled murals in its main concourse, as depicted above. The station was opened in 1910 and the hilly and rocky terrain of the city meant that the lines into the platforms lead immediately into a lengthy tunnel. Services are therefore limited and it is Campanh„ on the city's outskirts, which is the city's main station. All services from S„o Bento call at Campanh„ but not vice versa. For an account of the journey from here to Coimbra, click here.

S„o Bento occupies a fine stone structure on the eastern side of the PraÁa de Liberdade, which lies just south of the main Avenida dos Aliados. On the opposite side of the road is the main STCP (Oporto Public Transport) enquiry and sales office. Within the railway station is an efficient enquiry office.

As in Lisbon, the main railway station lies some distance from the city centre. Campanh„ is 2km from the centre. Access to the station by rail is complicated from the south by the terrain and until recently complicated reversing procedures were necessary. The replacement of the Dona Maria Pia bridge across the Douro by the new S. Jo„o structure in the 1990s has simplified this route. Likewise, access to the station from the city centre has been transformed in recent years by the arrival of the Metro, which now serves Campanh„.

Trindade Station lies behind the church of the same name which, in turn, lies just behind the Town Hall (MunÌcipio) at the top of the Avenida dos Aliados. By summer 2001 it had closed and the tracks had been lifted but, before then, it had been a thriving suburban station serving destinations to the north Oporto which included PÛvoa de Varzim (30km) and Santo Tirso (25km). Its narrow gauge services have now been replaced by the new Metro do Porto, a light-rail system and the first new light-rail vehicle ran through to the station on 20 November 2002. By 2005 Trindade was operational as a busy Metro station..

Many of the class 9600 units which formerly operated from here have been sold to Cameroun, with others going to Argentina.

As in Lisbon, the main suburban and short-distance services are organised into four "families" of service, operated by a sub-section of the national company CP (Caminhos de Ferro Portugueses). This sub-section is the Unidade de Suburbanos do Grande Porto, (The Greater Oporto Suburban Services Unit) and the groups of services are: 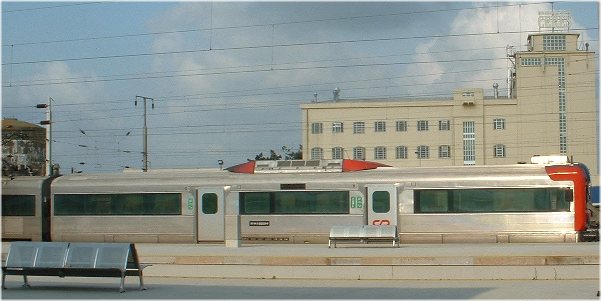 Remodelled unit at Campanh„ in summer 2005

New EMUs (class 3400) were introduced in late 2002 on the suburban services. Longer distance services include the Alfa Pendular expresses to Lisbon. These use Fiat Pendolinos and call at Coimbra, Aveiro and Leiria en route to Lisbon Oriente and Santa ApolÛnia or Pragal. 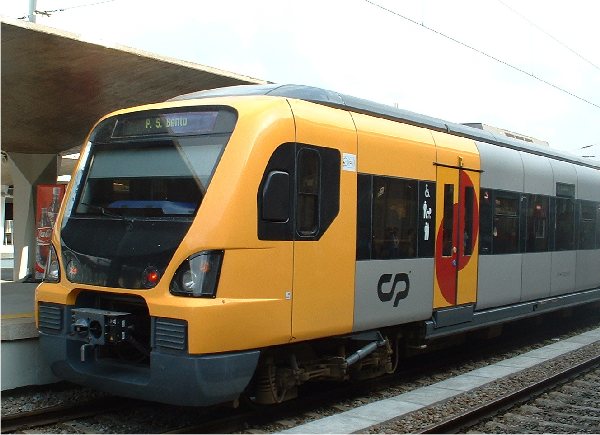 New Eurotram Light-Rail Vehicles (LRVs) are being introduced over a projected 70km network of the Metro do Porto, which will have 66 stations, 10 of them underground. A major feature of this system is a new tunnel linking Campanh„ and Trindade stations through which three new services will run via Senhora da Hora, north of the city centre, to Matosinhos, PÛvoa de Varzim and Trofa. A fourth line will link Santo OvÌdio (Gaia) with Hospital de S. Jo„o in Oporto.