Because of the demise of U-Net webspace, from 5 March 2015, this site will move to a new location at http://www.lusaweb.co.uk.

Please be patient if there are any glitches in this process!

Oporto Excursions by Public Transport - To Rťgua and Lamego 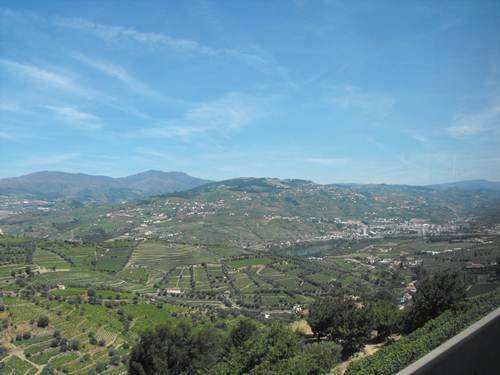 Rťgua, for many years, was an enshipment point to Oporto for the port wine trade whose vines were grown further up the Douro valley, whilst Lamego is a pictureque and historic town some 15km to the south. Rťgua, sometimes known by its full name of Peso da Rťgua, lies near the confluence of the rivers Douro and Corgo, the latter draining from the north into the former.

Whilst the quickest way from Oporto to Rťgua and Lamego is by road, in a car, a far more enjoyable route is by a combination of train and coach along a more circuitous route than the motorway. Indeed, the train ride from Oporto (S. Bento) to Rťgua features an extensive run alongside the River Douro for the final third of the trip, (sit on the right hand side for river views). Then, from Rťgua station, you can take the EAVT (Empresa Automobilista de ViaÁ„o e Turismo Lda) bus up the steep and winding route to Lamego, which provides magnificent views of hilly landscape (sit on the left hand side for the best views). The bus journey is about 15km in length.

Right: A view from the Rťgua to Lamego bus.

And the whole trip is good value; a standard day-return fare of 14.95 euros (2011) from Oporto to Rťgua, plus just 4.20 euros return for the twenty-minute bus ride to Lamego. Rťgua is generally glossed over in tourist guides as little more than a transport interchange and faded port wine entrepot but it has more to offer than that.

Oporto to Rťgua by Train

You can catch fairly regular services from Porto S. Bento or Campanh„ stations to Rťgua. It takes around two hours for the 107km journey on a stopping train. On arrival at Rťgua you will see a number of steam locos, railcars and old carriages rotting away on the sidings and the narrow-gauge steam Henschel 0-4-0 loco "E1", mounted on a plinth. "E1" was formerly the pilot shunter loco at Rťgua. Under some cover is an old train (loco and carriages) from the Vila Real narrow gauge branch line, which used to start at the stub platform just beyond the main station buildings at Rťgua. This branch line is currently closed, supposedly temporarily.

The station itself has a good cafť which also doubles as something of a regional souvenir shop, whilst part of the station's formerly extensive goods store has been converted into an attractive cafť which uses an old goods wagon as part of its outdoor seating area.

If you turn right immediately outside the station and walk 100 yards or so you will find the Rota do Vinho do Porto building, which is also a kind of tourist office where you can get maps and information on the town and surrounding area. The main tourist office is not well sited, some ten minutes walk away in the upper town. 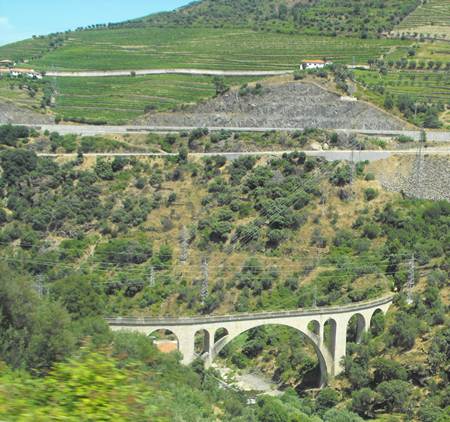 Rťgua is situated on the north bank of the River Douro and there are three major bridges across it in the town. Farthest away from the station is the soaring and impressive new motorway bridge from Viseu. This, the Ponte Miguel Torga, goes across the River Douro at a height of up to 85 metres at its maximum. It is a pre-stressed concrete bridge and elegantly conveys the IP3 motorway.

The nearest of the three bridges to the railway station is the attractive "Ponte MetŠlica" or Metallic Bridge. This was built as a road bridge in 1872 in King D. LuŪs I's reign, whose name and bridge-building are more famously linked in the main Ponte D. LuŪs double-deck bridge in Oporto. However, the 19th century bridge in Rťgua had to be taken out of use in 1949 due to the poor state of its wooden "table" carrying the roadway. After, incredibly, more than sixty years of being unused for any purpose, it is now (2011) being repaired, but for pedestrian-only use, at a cost of more than one million euros.

In 1949, therefore, road traffic was transferred to the adjacent unused rail bridge, which had been constructed years earlier for the proposed line from Rťgua to Lamego. However, that railway was never built and the bridge was therefore available for road traffic and is the one still in use today. Sadly, it was from this current road bridge that, in 1964, a Lamego to Rťgua EAVT bus service was struck near the Rťgua end of the crossing by a Mini car and plunged 30 metres onto the concrete at the side of the river below, with the loss of seven lives. It is ironic that on virtually the only straight and level section of that bus route such an awful accident should occur. For more on this, click here.

The rail link from Rťgua to Lamego was planned as early as 1906, the same year that the line up the opposite valley was opened to Vila Real. However, although the foundations for the track had been made and space for the station at Lamego had long been earmarked, the railway only got as far as building the vital bridge across the Douro in 1933. Further delays meant that World War II effectively put an end to the whole project, leaving not only the rail bridge as a white elephant, but also another sister structure a little distance from Rťgua - the Varosa bridge, pictured left. That bridge is still unused other than by pedestrians and in 2011 it looked distinctly overgrown with foliage. It can be seen (left) from the Lamego to Rťgua bus route.

Rťgua has a busy trade in river cruises ranging from 50-minute tasters to more lengthy journeys up the Douro. The main landing stages and booking offices are to the right as you emerge from the railway station. On the same road is the newish Museu do Douro. Although the "main site" is in an impressive building on this main road, apart from a well decorated bar and good view down to the river, there is not much in this building to interest the visitor other than, apparently temporary, art exhibitions and a shop. But your museum ticket also covers the museum's other more interesting building which is not signposted but is out of the back door and up a side street. In this second building is the better part of the museum, an extensive exhibition, with short films, of life in the Douro in the past. Entry to the whole museum was 5 euros in 2011.

Rťgua to Lamego by Bus 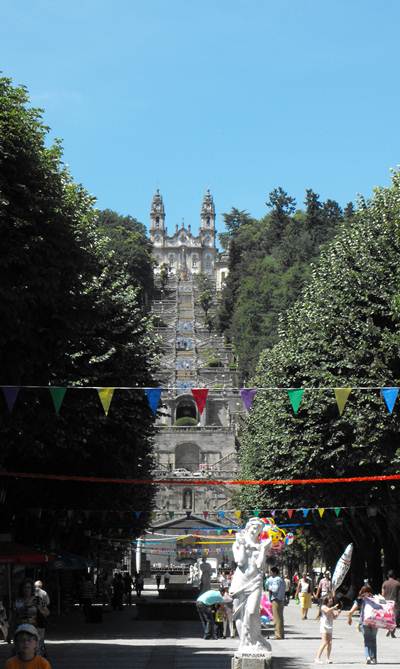 Immediately outside the railway station, on the far side of the road is the bus and coach park. Here you can catch one of the irregular EAVT single-deck buses to Lamego. This service, on departure, almost immediately crosses the river on the lower and older of the two road bridges. The bus almost immediately starts to climb up the side of the valley and after tenty minutes of twisting and steep roads, via small villages such as Sande, it reaches Lamego. The route affords superb vistas of the terraced landscape, still largely full of vines. In Lamego the bus runs the length of the main street to terminate, before returning empty to the bus station.

Lamego's main sights include its castle, cathedral and the impressive Nossa Senhora dos Remťdios church (pictured, right) which is reached up a series of steps - a smaller version of the Bom Jesus church near Braga but, in this case, with no funicular to assist your climb.

Companies such as Tomaz do Douro/Via d'Ouro run cruises between Rťegua and Oporto (Estiva quay). You can sail one way and catch the train the other as part of a day package costing 65 euros up-river and 60 euros down-river (2011) and taking around 11 hours in all. Rťgua is also a stop on this company's service from Oporto to Pinh„o, further up the Douro valley. The firm also operates a service from Rťgua to Barca d'Alva, near the Spanish border which was a former rail destination, now abandoned. Another cruise runs to Pocinho.

The Douro Azul company runs longer cruises as well as shorter trips to Oporto, Barca d'Alva, Pocinho and Pinh„o. The longer trips vary from one-night excuursions to five-day holidays from Oporto to Barca d'Alva and back with meals and entertainment for 449 euros (2011).

Pocinho is now the furthest point to the east that trains serve along the scenic Douro Valley line. Services run either from Oporto itself or start at Rťgua. The pleasant 175km journey from Oporto to Pocinho takes four hours or so.

It used to be a pleasant narrow gauge rail journey from Rťgua up the Linha do Corgo (Corgo Valley Line) to Vila Real, a 26km journey that used to take nearly an hour to wind up the valley. However, the line was closed in 2009 for repairs and, given that it shows little sign of reopening (2011), many fear that it has gone for ever. Buses do run from Rťgua to Vila Real, however. Vila Real is a pleasant and busy little town which also has bus connections directly to Oporto.

Though it is no longer possible to reach Chaves by train, there is a coach service from Rťgua up to the historic town of Chaves, near the border with Spain.

In short; Rťgua may not be on the itineraries of most tourist guidebooks, but for those interested in transport and who enjoy scenic views, it is well worth a visit.