20-20 RESEARCH ARE THE YOUTH TEAM'S SPONSORS
Click the picture of manager George Heslop, with Bob Peters (MD of 20/20), to visit the company's website.

Altrincham's Youth side are managed by George Heslop, ably assisted by Neil Thomason and Mal Bailey. The team plays in the Bolton and District Amateur Football Combination (North West Youth Alliance Under-18s' Premier Division). I am very grateful to George for his help in providing information for this page. If anyone else has information on the Youth team, I am always happy to receive it. You can e-mail me here. John Laidlar. 12 August 2003 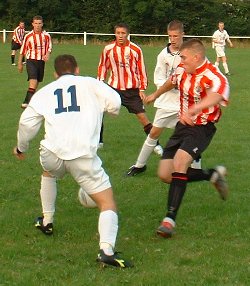 Four Alty Youth players are currently training with the Cheshire FA Youth Under-18 side. They are Adam Douthwaite, Josh Collins, Barry George and Alex Frost.

Alty Youth drew 1-1 against Runcorn FA last weekend. Courtesy of George Heslop, there is a brief report and also player statistics here. 18 May 2002 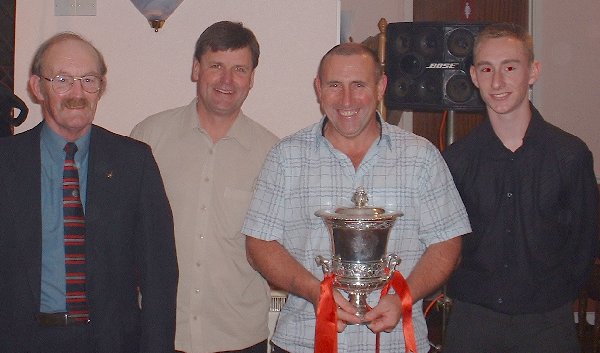 Many thanks are due to the organisers of a highly successful Altrincham Youth Team presentation night, held last night in a packed Noel White Suite at Moss Lane. Above, Youth Team manager George Heslop, coach Neil Thomason, club chairman Geoff Goodwin and Youth team captain Paul Glynn pose with the Cheshire FA District Youth Cup won by the Altrincham & District FA side, which was entirely made up of Altrincham FC players. 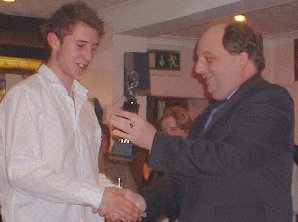 The evening was expertly compered by Joanne, sister of Steve Lunt, Alty's youth and first-team striker. After a brief review of the season by manager George Heslop, in which the youth team had finished fourth in the NW Youth Alliance Premier Division and reached the finals of both the Open and Premier Cups, the award was made of the Jackie Swindells Trophy. This is a new trophy, named after Alty's goalscoring legend of the 1960s, and sponsored by STAR, the Altrincham supporters' trust. This was awarded to Steve Lunt by STAR Vice-Chairman and Moss Lane stadium officer Phil Taylor (shown above). Steve has led the way for the Youth team, having both played and scored for the first team in 2002-03.

Next, came the presentation of the Cheshire FA's District Cup by Norman Sherriff, Secretary of the Altrincham & District FA. This was won by the Altrincham & District FA side, managed by George Heslop, Neil Thomason and Mal Bailey and comprising a team made up entirely of Altrincham FC youth players. The trophy was collected by captain Paul Glynn, who had no trouble in lifting the award after undergoing a weight-training course with the first-team this week! Mr Sherriff not only congratulated the team and management for their on-field displays, which have seen them lose only once in three seasons from open play, but he also commended the team's smartness and behaviour off the pitch.

Winner of both the manager's and the players' Player of the Year trophies was Steve Lunt. Making the introductions, first-team manager Graham Heathcote revealed that he had come to the event primarily to see what trophies looked like, after the first team had finished 14th in the league and been knocked out of the various cup competitions! More seriously Graham congratulated the team for their efforts and reaffirmed his willingness to give young players a chance, noting that he himself had been given his debut as a 16 year-old at Altrincham. Graham also paid special tribute to Neil Thomason and Mal Bailey for their sterling work for the youth team alongside manager George Heslop. Club chairman Geoff Goodwin presented the Players' Player of the Year Award and it was subsequently announced by Neil Thomason that Geoff was providing new kit for the youth team next season. Neil also thanked Stamford Van Hire, who will be sponsoring the youth team's away travel next season.

It was also very fitting that a presentation was made to Sean and Della, licensees of The Stonemason's Arms in Timperley, who had raised more than £600 for the youth team through events organised by the pub. Sean announced that he expected to raise even more funds in the coming season.

First prize in the raffle, which raised more than £200, was won by Jenny Heslop, wife of George, and herself a great servant of the Club as bar and shop manager.

A number of this season's youth squad will be over-age for next season's competitions. These include Greg Byrne, Paul Glynn, Francis Evans, Richard Harrison, Jon McEvoy, Mark Griffiths, Todd Hayes, Joel Ekolongeni. However, a number of these players will be training with the first team over the summer. Those who remain eligible for next year include Barry George, Alex Frost, Michael Bailey, Steve Lunt, Josh Collins, Adam Douthwaite, Luke Killeen, Chris Davies, Anthony Potts, Andrew Thorpe, Stevie Taylor and the Lugsden twins, Keiran and Kelvin.

The draw has already been made for the District Youth Challenge cup for 2003-04. Altrincham will be in the same group as Chester, Macclesfield, Stockport and The Wirral's FA sides. Group two will comprise Crewe, Mid-Cheshire, Runcorn and Stalybridge.

Alty manager Graham Heathcote has "confirmed that during the pre-season programme, the door to the senior squad would be open for the youth team, and he will be monitoring their progress. He also revealed that the club are looking at the possibility of farming out youth team players to North West Counties clubs, in order to play more regular football", according to SAM. 9 May 2003

Tonight, for the second time this season Ashton Athletic failed to raise a team against Altrincham. This time, rather than a replay, Alty were awarded the three points. They complete their season, away at South Sefton Borough, at 2pm on Sunday.

Altrincham Youth lost 1-0 away at Leigh in a league match last night. Alty are at home to Prestwich Heys on Thursday (6.30pm at Wythenshawe Town FC). 4 May 2003

Alty Youth lost 3-1 to Leigh RMI Academy in the NWYA Open Cup Final at The Robin Park Arena, Wigan today. Alty were reduced to 10 men after only 60 seconds when Michael Bailey was dismissed for a verbal offence, following the award of a penalty against Josh Collins, which was converted. Pictured above is the penalty incident as Collins brings down a Leigh player. Report here..

It has been confirmed that New Mills have resigned from the NWYA Premier League which means that Altrincham have a bye into the Premier Cup Final as they were set to play New Mills in the semi-final. Also, as New Mills's league record has been deleted, including their 5-4 win over Altrincham and defeats to some of the league-leaders, Altrincham are now back in with a mathematical chance of winning the league title. The revised league table has yet to appear on the NWYA website.

Altrincham Youth have two cup finals on the horizon: